“Help! I sent my book off to be edited, and it’s come back covered with red ink! The editor said he used ‘Track Changes’. What does that mean, and how do I get my book back?”

Editors sometimes forget that the tools with which they work on manuscripts are not as familiar to people who don’t make a living using Word. Here are a few quick notes on what to do with the information your editor has given you. As an author you may never have had cause to use the Tracking options under the Review tab. I know I wrote my first three books without ever looking at it. 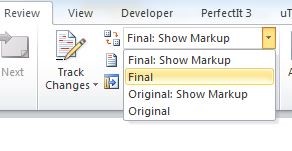 Let’s explore these functions. Pull up your edited WIP. If we click on the “Final: Show Markup” drop-down box, the following dialogue appears:

What does your MS look like? It shows your text, with all the various corrections made to it in (usually red) coloured ink. Click on the Final option (don’t worry, everything is reversible at this stage). All those amendments suddenly disappear. This is what your MS would look like if you accepted all of your editor’s suggested changes. Click on “Original”. Now your MS is showing what you handed to your editor.

Here’s an example. It’s the opening para of a middle grade adventure story. There are quite a few things that need editing. See if you can spot them all. 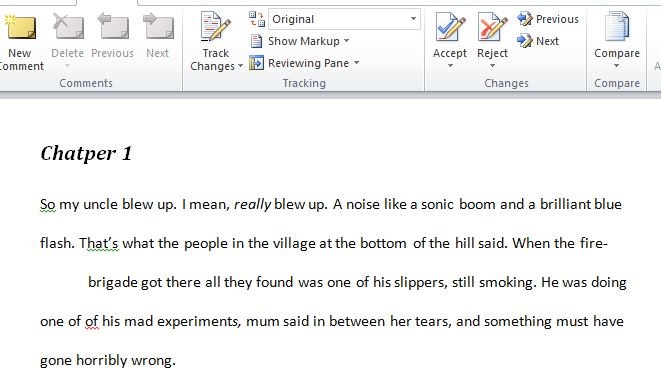 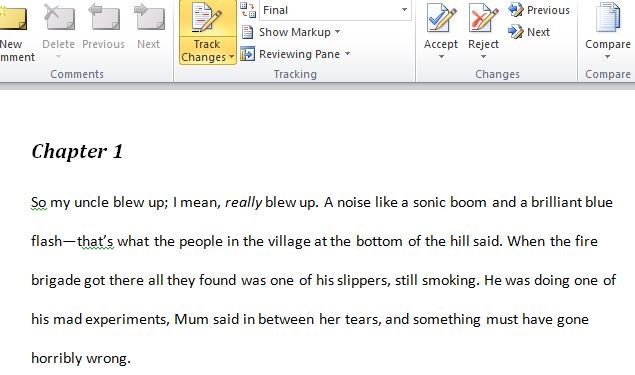 What did the editor do? Click on “Show markup” and all the red ink appears.

So all nine problems?

Some of these changes are objective. No one would argue, I hope, about “Mum”, or “Chapter”. Similarly with formatting issues. No one would argue about a rogue italic letter at the end of a normal-font word. Because of this, some editors don’t track changes in formatting. You can find out if your editor has done this by clicking on the Track Changes dialogue. One of the options that comes up is “Change Tracking Options”. This opens a new dialogue box with lots of options.

Half way down is a check-box, with “Track formatting”. If this is unchecked, any changes to your formatting will not be highlighted in red ink. Most authors would be happy with this, but if you’re not, you should say so (before your editor starts work!) If you’ve got lots of formatting problems in your MS, then I’d let your editor just get on with it, personally. 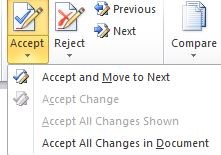 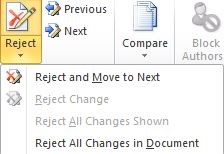 What to do about the other issues your editor has pulled up? Moving right along the toolbar at the top of the page are two buttons, “Accept” and “Reject”. Clicking on accept pulls down these dialogue boxes: pretty self-explanatory. If you’re happy with all of your editor’s suggestions, click “Accept all Changes”. The red ink disappears, the text shuffles around a bit (this can take some time if it’s a huge MS with lots of changes) and voila, your finished MS. Now, if you click on “Original” in the Track Changes dialogue box, the view is the same as the “Final” version. All the amendments have been incorporated into the text. Instant regret? There’s always the “Undo” feature (very top left hand corner of your Word Window)!

Alternatively, you can go through each amendment, choosing to accept or reject each change. As you work, each change will either be deleted, so that all trace of it is expunged from the MS and your work will be as you originally wrote it, or enacted, so that your MS will henceforward reflect the change.
One of the changes that the editor suggests isn’t really right. The use of a semi-colon in the first sentence is questionable (editors are human too!), so reject that change. The reason that sentence came to their attention is that the second sentence is a fragment without an object. You could leave it as is, but perhaps better would be to insert “he”, as in “I mean, he really blew up.” This solves the fragment sentence problem without changing the punctuation.

Have a play around with the functions. Don’t like the result? Use “undo”.

One caveat: if you click on something and nothing seems to have happened, beware. It might be the case that something has happened further down your MS that is not in the current window. If you then carry on working on the document with this change saved, there’s every chance that eventually you’ll overwrite your original with a version that you might not want. This is the origin of those horror stories where people accidentally delete the last five chapters of their masterpiece.

If you do anything in Word and “nothing appears to have happened”, go back to that little “undo” arrow in the top left hand corner.

Clicking on the little down arrow brings up an audit trail of all the amendments and changes you’ve made to the document this session.

If you move your mouse down the list, they turn orange. Clicking on any of them undoes that action—plus all subsequent actions—on your document. If you want to reinstate something you’ve undone, click on the “redo” button next to it. If you go to this undo list and the last action is something you really didn’t want to happen, like deleting the last half of your manuscript, then one click on “Undo” and you’ve saved yourself six months of broken-hearted rewriting from scratch. You can thank me later!

This is a lightly edited version of an article originally written for the Alliance of Independent Authors blog that appeared in March.
I can heartily recommend their site to authors as a great source of information. Link here.