Testimonials from authors, with whom it’s been a pleasure to work:

“Thanks to my editor, Richard Bradburn, for your insight, grammatical discipline, and  a number of cheap (but very funny) jokes” – Bad Napkin by TSW Sharman, published 2016

“I just wanted to say so much about how phenomenal your work is. Your developmental edit is absolutely brilliant. I wish you were writing the book” – 20 20 Vision by A Childs, wip

“I still remember that email and often think about what you wrote. You had faith in me even if I didn’t.” – Secrets at Ocean’s Edge by K Napier, published in Jan, 2018 by Hachette.

“I always had a certain dread about the idea of an editor, but you have turned that dread into an immensely positive and cherished experience.” Narcissus, by G. Colton, wip

“You’re really an excellent editor. I’ve had quite a few people look at it, and no-one has picked that up, but as soon as I read your comments I was like OF COURSE! Best critique ever.” Emma Cardwell, wip

Thanks so much for your comments. That is certainly the most penetrating and insightful review I’ve received”

“Without a doubt, the best critique I have ever received. I cannot thank you enough”

“Thank you for your great review of my book. You’ve given me tons of things to think about”

“Thank you for such detailed and helpful criticism and also, the great positive remarks”

“Thank you so much for your review. It was excellent and just what I was looking for””

“Your review was helpful, honest and spot on”

“The in-depth critique was comprehensive, insightful and, above all, useful.”

Congratulations to editorial.ie client Kali Napier, signed with Hachette Australia for a two book deal in October 2016. “Secret’s at Ocean’s Edge” was published in January, 2018.

Richard Bradburn is a writer (his comprehensive guide to self-editing, Self-Editing for Self-Publishers, launched in April 2020), journalist (frequent contributor to the Irish Times, as well as local press) and independent professional editor.
He specialises in developmental editing of novels, with a particular love of YA, historical fiction, thrillers, romance and literary fiction. His global editorial client list includes self-published and traditionally published authors, some of whose testimonials are included on the left. He also copyedits, proofreads, formats for Kindle, coaches, beta-reads, ghostwrites and makes a fantastic lemon meringue pie.
He’s a Professional Member of the CIEP, Partner member of ALLi, an affiliate editor of writing.ie, and Approved Supplier to Publaunch, as well as helping moderate the popular writing and editing groups Fiction Writers and Editors and Ask A Book Editor on Facebook.

In order to give back to the writing community that keep him in lemon meringue pies, he hosts TheOpeningLines.com website, an entirely free service where he will critique your novel’s opening 1000 words.

When he’s not editing, he’s trying to finish his second album of contemporary classical piano music released under the Chiaroscuro project name (the first album, Interlude, is available on iTunes, Amazon and all good record stores).
He hates having his picture taken, but some people demand to have a face to the name, so he begrudgingly includes his mugshot below. Don’t laugh. 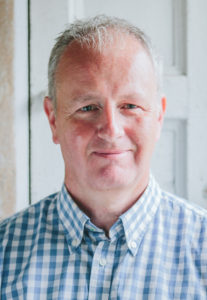