From the people over at Bookcave comes a list of peeves they call “Pet Peeves Readers Wish Authors Knew About”. Any editorial.ie client will have had any of these issues in their writing pointed out to them in the course of editing work on their manuscript, but I thought the list was interesting for a couple of reasons:

The most common advice doled out to would-be authors is that their book is too long. There are good reasons for this. Many common writing errors such as too much description, too many sub-plots, too many main characters and too much “stage management” (… he opened the door. He stepped out. He closed the door behind him, putting his key in his pocket …) result in turgid and bloated stories. But here’s a response from readers. They’re finding that many books published (and the Bookcave site is generally about ebooks) are too short – not satisfying enough. I think this is probably a reaction to the “bang out a 50,000 word novel every month” crowd. Be warned. Readers are looking for decent length stories that they can get immersed in. At editorial.ie, no word or sentence is cut unnecessarily. In the last two months I’ve edited 120,000 word and 150,000 word novels. I suggested cuts in both of them, but only to eliminate weak plot sections, sub-plots or characters, and both will still probably be well over the 100,000 word threshold at final draft.

This isn’t just an editor peeve, see?! Readers can lose the thread of a plot and immersion in a character very quickly if a writer hasn’t distinguished between points of view of different characters sufficiently clearly. Yes, some writers manage it, but it takes a lot of skill.

This may be just a sign of the times, but there is enough sh*t going on in the real world without reading a book that ends in depression, failure and death. And “bad” endings may be subjective, but I take it to mean that readers want resolution to character arcs and plot lines.

Cliffhanger endings are a no-no. I’ve said this many times before, but some authors find it hard to believe. Well, here it is from the horse’s mouth — the number one top peeve. It particularly applies to series writers. If you’re writing a series, you must ensure that each book ends with some kind of satisfying resolution, even if there’s an overarching plot that doesn’t resolve until the last book in the series. I liked the Phillip Pullman YA series His Dark Materials but could not for the life of me think why he was allowed to end book 2 in the way it does, fizzling out mid-journey. I can only assume it was publisher pressure. They wanted a trilogy, because they know trilogies are popular, and/or they thought book two would be too long (see first point above) and therefore not a big enough profit margin at a realistic price point. Shame on them!

Here’s the full list. Need help with any of these problems in your own writing? You know where to find me. 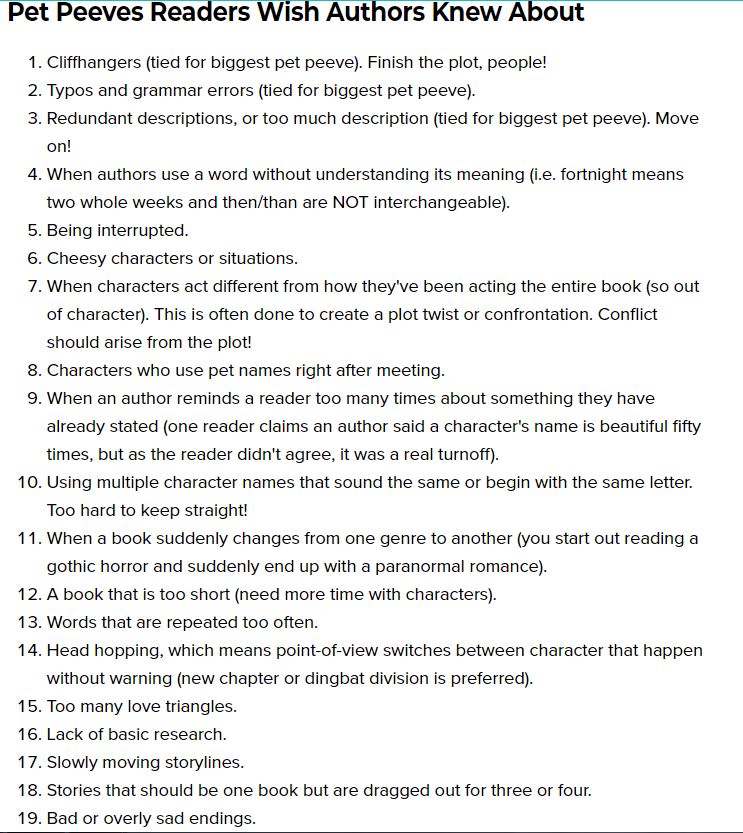