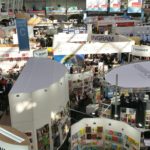 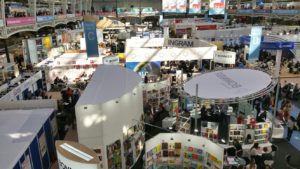 A tiny part of the whole fair.

At the London Book Fair in Olympia this week. I think attendance for would-be traditionally published authors should be compulsory. If there’s nothing else that opens your eyes to the sheer scale, size and economic weight of the publishing industry’s big guns, then it’s at least one day spent at a fair like this, which is really (the growing self-publishing and indie author contributions notwithstanding) an industry networking event.

Upstairs in the International Rights Centre are some 500 odd literary agents, all wheeling and dealing. There are 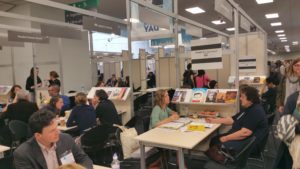 The collective noun for hundreds of agents?

hundreds of four-seater desks… hundreds. And hardly any seats are empty.

The size and professionalism of the big publishing stalls down in the central hall is almost intimidating. People like Simon and Schuster, Random House, Harper Collins. These stands have diligently guarded approaches. They’re glossy, substantial, solid, polished. They have receptionists. There are waiting lists. They don’t have bouncers and red ropes yet, but maybe next year.

In a discreet corner upstairs is a mock-up of London’s famous Ivy restaurant, with its trademark stained glass windows. You can only peer through those famous diamond tessellations unless you have an invitation to deal and wheel in one of the plush seated, oak engraved (200 point, Times New Roman, gold leaf inlaid) booths. Peering inside, you see serious men and unsmiling women, earnest in conversation, heads slightly huddled. They’re discussing six figure deals in here: six figure deals for rights to a single book, a debut novelist, lives in South London. “I called her and she burst into tears.” I’ll bet.

Something to aim for.

This is a big, global business, still making billions despite its oft-predicted demise. If you want one of the industry behemoths to publish your work, what you show them had better be good. To them it’s marketable, saleable product. Standards are high, rightly so. If you want your book to be traditionally published, you should want it to be the best book that publisher has seen this year. That should be your aim, even though they’ve seen thousands. Not only should it be a bright original voice, with a bright original storyline, but it should be beautifully written, too. Because if you’ve cracked that, then those rights negotiations are going to run in to six figures. That’s for UK and Commonwealth Rights. Alone. It’s another six figures for US rights. And then there’s Brazil, and Finland, and Israel, and Germany, and Holland and… and… We can all dream, right?

It’s been a day of curious contradictions.

I think many amateur writers, understandably enough, have a bit of a misconception about publishing. “It’s a bit of a cottage industry. The commissioning editor is an avuncular old fellow with half-moon glasses. Long liquid lunches. Afternoons spent dozing on a bench in St James’s Park. It’s all about art, and writing.”

It isn’t, and it takes a day at a fair like this to see the fearsome engine of the publishing industry at work. It’s an education. But it’s also a day of dreams: how high the rewards are if you get it right. It’s something that every author needs to see.