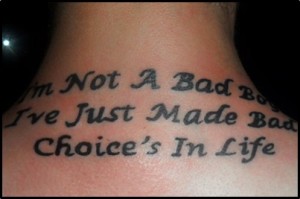 . . . one of those being his choice of tattooist

Apostrophes. Why do so many people get this particular little punctuation mark wrong? We’ve all passed the market stall with “5 banana’s for a £”. Left is one of the ways you can permanently display your ignorance about the correct use of apostrophes to the world – either that or spend the rest of your life wearing roll-neck pullovers. Perhaps it doesn’t matter, since so many people wouldn’t even recognise it as a mistake. Is it only grammar pedants who are going to point and stare? Hopefully not. For those who think it is a bit of a howler, here’s the gen on apostrophes.

As always, I think it helps to know a bit of the history behind the issue. In the same way that we use apostrophes to denote missing letters in contractions such as “didn’t” and “isn’t”, the use of the possessive apostrophe came about as a contraction. In Middle English, there were no apostrophes. Possession was shown by appending an “es” to the noun. Chaucer starts the Canterbury Tales thus: “Heere bigynneth the Knyghtes Tale”. In time, the “e” was dropped in favour of an apostrophe, so we’d now write “Here begins the Knight’s Tale”. Bearing that in mind, these are the rules:

So when implying possession, use an apostrophe; “the knight’s tale”, “the squirrel’s nuts”. Easy. If the possessor is plural, then put the apostrophe after the “s”. So if it was a whole dray of squirrels and their nuts, it would be “the squirrels’ nuts”. 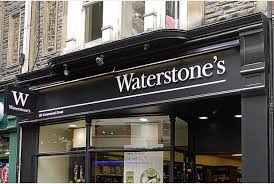 If it was the story of a squadron of knights, it would be “the knights’ tale”. This is still consistent with Chaucer since, in Middle English, the plural possessive form of knights would have been knightses (sounds a bit like Gollum talking, perhaps where Tolkien got the idea from), so you’re still using the apostrophe to denote missing letters.
Exceptions to be wary of? There are some plural nouns (“women”, “people”) that don’t end in “s”. In this case, the apostrophe conforms to the rule, that is, it goes before the “s”, so “the women’s toilets”, “the people’s Princess”. And some singular names already end in “s”, “Charles” and “Prince of Wales”. The good news? You can do what you like. You can use either “Charles’ mother Elizabeth” or “The Prince of Wales’s mother Elizabeth”. Either is right. A general rule of thumb is to write it how you would say it. So if you would naturally say “Charlesiz mother”, then use “Charles’s”. In the US, there’s a decree from some style guides that you shouldn’t use the “s’s” ending if the next word begins with an “s”, so “boss’s office” but “boss’ secretary”. That just reads weirdly to me and it’s contradicted by other style guides, but I guess whoever’s paying the writer calls the shots.
Note the use when talking about periods of time. They are still consistent with the rule, but might need thinking about. “A week’s wages” (singular week) but “three weeks’ wages” (plural week).

Use an apostrophe to denote a missing letter when writing informally. So “Do not walk on the grass” written informally would become “Don’t walk on the grass”. Seems easy enough, but two contractions are notorious for causing people to make mistakes. “It’s” is a contraction of “it is” (or “it has”). If your sentence, written out in full, would include either of these phrases, then you can use “it’s” as a contraction. So, “It’s very windy today. It’s been windy for weeks”. However, consider “The ostrich buries its head in the sand”. This sentence is not “The ostrich buries it is head in the sand”, so no apostrophe. If you can’t expand the word “its” to make “it is” and your sentence still make sense, don’t put in an apostrophe.
“You’re” is the other contraction that causes a lot of mistakes. But again, there’s a simple way of making sure you’re right. If you can’t expand the word to “you are” and the sentence still make sense, then it’s another form of “you’re” that’s needed. So “You’re really pedantic” is good. “You’re exam results are shocking” is not.

I’ve read a grammar guide on the internet that says “You have too many CD’s” is okay. Not in UK English it isn’t. It’s “You have too many CDs”. Only if by omitting an apostrophe the reader could be confused is the use of one acceptable. So if the text format were obliging you to write in capitals, for example, you could say “CD’S” rather than “CDS” which might mean something completely different. The same is true of dates. We talk of the 1990s, not the 1990’s. I’d be interested to hear if the “CD’s” usage is common in the US or elsewhere.

When not to use an apostrophe 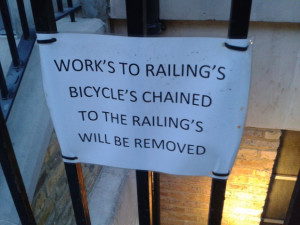 Don’t use an apostrophe when pluralising. It’s the number one fail. It’s bananas not banana’s; taxis, not taxi’s. Whoever wrote this sign at least had the courage of their convictions – they were, after all, consistent. There’s a pedant’s bumper sticker available. “Every time you use an apostrophe to denote a plural, a kitten dies”. Or should that be die’s?

Trawling the internet comes up with a few other howlers: 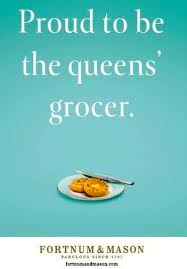 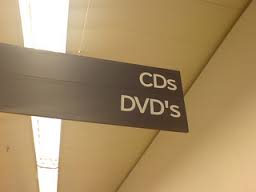 Got it half right. 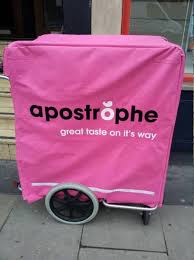