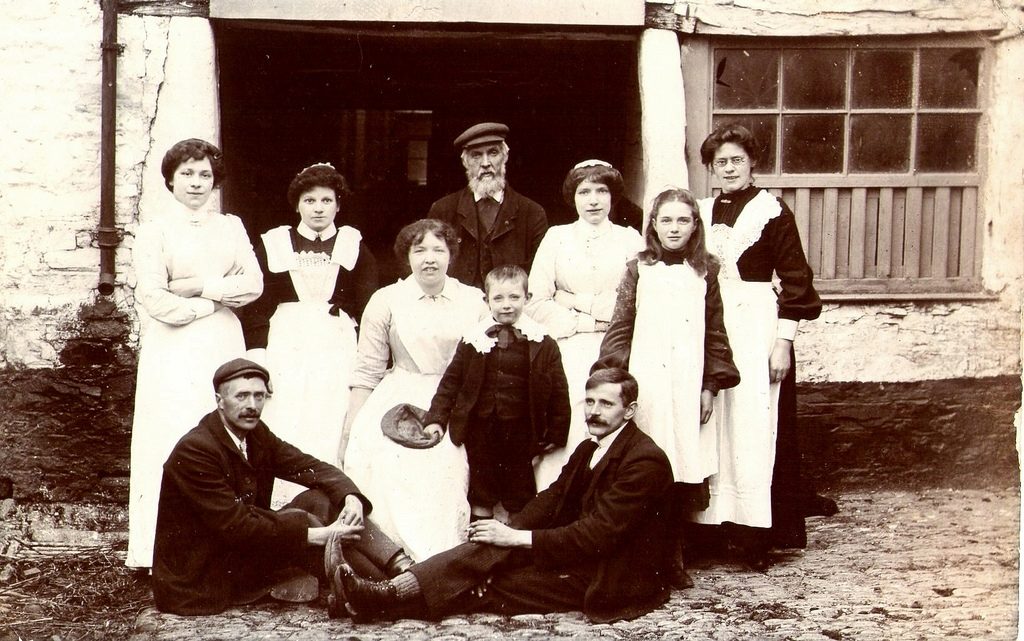 Firstly, where does the term come from?

Without getting too technical, classical scholars will be aware that the origins of the prologue, to which maid and butler dialogue relate, date back to Euripides and the Ancient Greeks. The idea that the scene of a stage play should be set at the very beginning of the play by a narrator talking directly to the audience, or by two minor characters having a conversation, certainly predates Shakespeare.

The curtain goes up. A banqueting hall, dirty dishes on the table, empty bottles, glasses, streamers and half-deflated balloons. Two characters enter, one carrying a mop and bucket, the other a brush and a rubbish sack. They begin to clear up the mess.

Maid: Well, that was certainly a party last night, on this the fifth year of Queen Georgina’s reign.

Butler: It was. All the gentry from across Northumberland attended, with carriages at dawn. The Duke’s only daughter, Jezebel, had a fine eighteenth birthday celebration.

Maid: So sad that she is a thoroughly spoiled and selfish child.

Butler: Yes. The Duke has had to indulge her wish to go shopping this morning, as if she hadn’t already got enough presents.

Maid: Yet Lady Southport didn’t accompany them, staying at home and complaining of a headache.

Butler: Indeed. I gave you several pills to take up to her. Strange that the Duke’s cousin …

Maid: You mean Horatio, the one with the eye-patch and the wooden leg, just back from the battle of Algiers and a war hero?

Butler: … yes, that cousin. He also complained bitterly of a headache this morning, saying he was going to stay abed.

Maid: The question of course, is whose bed, since when I went to empty his chamberpot just now, his room was quite empty.

Butler: It wouldn’t, of course, be the first time that Lady Southport has consorted with a sailor behind the Duke’s back.

Maid: No. Do you remember Blackbeard, the Irish pirate …

And so on. These two characters are telling each other things that they both know for the benefit of us, the audience. We eavesdrop on their conversation (if it can really be called that) and we establish the basic premise of the play, who the major players are and what the major plot issues are likely to be. It’s a form of exposition, of “telling” rather than “showing”.

In a novel, if there is a “maid and butler” dialogue problem, it is rarely going to be this blatant. In the opening that I was critiquing, one character says to another, “Well, that’s the last time you’ll need to do that long commute from Dublin on a Friday evening.” Although there’s nothing wrong with the sentence, when you think about it you’d be very unlikely to say that to someone who’s just walked in at the door having driven the width of Ireland. The traveller knows where they’ve come from. They know what day of the week it is. You’d be more likely to say, “You made it! You must be tired. Will I put the kettle on, or would you like something stronger?” The reason this author wanted to have his character say those words is because it was the last time the driver was going to make that journey and it was an important plot point to get across, but it’s still unlikely to be the first words of greeting. It would be like meeting someone at the station and saying “Well, the 5:52 stopping service from Victoria to Bromley run by Southern Rail looked pretty packed!”

How to avoid it?

How to avoid “maid and butler” dialogue occurring in your own writing? The problem arises when an author is too obvious in their attempts to influence the narrative. They want to get an important plot point or character development issue across in a conversation between characters, but instead of letting the characters speak, they are speaking through the characters. A reader will detect this unnatural author intervention a mile off and it will sound false and artificial. When you have something important for a character to say, make sure that they say it in a natural way, not in a declamatory, blunt fashion. It may take longer to say—showing generally takes a higher word-count than telling—but it will sound far more realistic and still get the message across. An example?

“Are you going to the party?” Sally said.

“I can’t.” Christine shook her head.

“Why not? Is it because when you were last at that house you were sexually assaulted by Jake’s best friend Rob?”

This is the scenario. Christine doesn’t want to go to the party because of a previous incident. They both know this, so Sally enunciating very clearly “because when you were last at that house …” sounds very artificial. It’s not what a girlfriend would say. But the author wants us to know Christine’s motivation for not going to the party. A more realistic conversation might run like this:

“Are you going to the party?” Sally said.

“I can’t.” Christine shook her head.

“Because,” Christine said, looking away.

“Ah hon.” Sally put her hand on Christine’s arm. “Sorry, babe.” She brightened. “But Rob might not even be there,” she said.

“He’s Jake’s best friend. Of course he’ll be there.”

The merits of the writing aside, I think we should be able to agree that the second conversation sounds more realistic. It gets the same information across and also manages to convey some nuances of the characters of the individuals concerned. The way I’ve written it, Sally comes across as a bit dim and unsympathetic. It’s longer, but that’s the downside of “showing” rather than “telling”.

(This post was written and used for the ALLi Advice for Authors blog.)