In the last part of this ‘show not tell’ trilogy we’ll analyse the following passage:

“I knew Mum had told me not to, but I was really curious; I wanted to see inside. The shed was half falling down, and Mum and Dad said that I could be crushed if it came down on top of me, so I was forbidden to go inside. I felt guilty about disobeying them, but I was more curious than guilty.
I started to go inside when I heard Mum shouting at me. She was standing by the back door, she’d seen me, and she was really angry. She told me off.
“Why didn’t you remember what we said before about it being dangerous?” she shouted, furiously. She said they had enough to worry about, what with the baby and everything.
Now I felt embarrassed, embarrassed at being caught. I felt angry at the baby too. The baby got all the attention. I know that was unfair and I felt guilty for feeling it, but I still did.”

Okay. Lots wrong with this passage, although it’s grammatically perfect. A child stands at the half open door of a dilapidated shed, aware that its parents have told it not to go inside and the good reasons why, but still curious.

‘Telling’ is invariably more concise than showing, so generally you’re not going to be cutting word count if you’re editing the ‘telling’ out of a piece. This is something to bear in mind if you’re writing to a specific word limit. It’s also why news journalists with space limitations largely ‘tell’, and don’t show. However, in this piece we can eliminate the first two words. “I knew” actually tells us nothing. We know implicitly what the narrator knows. So, “Mum had told me not to” is perfectly adequate. Even better would be to use the actual dialogue. “Don’t go in there,” said Mum. But in this case the conversation took place in the past so that isn’t an option. Verbs like “to know”, “to feel” and “to look” are often referred to as filter words. More on “to feel” later.

There’s another bigger issue with that first half sentence. “Mum had told me not to.” Who is the child talking to? He’s not actually saying this out loud, so he appears to be talking to the reader. That immediately creates a distance between the reader and the child, so rather than being the child, the reader is now merely observing the child. That’s a far weaker outcome as far as the reader is concerned.

“I was really curious” – There must be a better way to evince the child’s curiosity than merely telling us he is curious. Do we even believe him? You’re a struggling author. You submit to an agent. You get a note back. “I really enjoyed reading your book.” Do you believe them? No. Not really. What would make you believe them? If the next sentence was “I’m dying to represent you. I know exactly the right publisher for this. Could you come in to the office to discuss it, as soon as possible?” Now we’re talking. The agent is not merely telling you they liked your book. They’re showing you. In this piece I’d like to see the child being curious, I’d like to feel his curiosity.

“I felt guilty” – straightforward telling, “I felt”. “I had bacon and eggs for breakfast”. “I studied law at Cambridge”. These are all very informative sentences, but they don’t tell us anything about the experience that the character had, only what they tell us happened. And again, do we necessarily believe them? This is what I meant by “truth” in the previous post. There is no inherent truth in being told something, and we want, as readers, the story to be true. “To feel” is one of the most frequently misused filter words. “I felt hot” tells us almost nothing, and may or may not be right. “My shirt stuck to my shoulder blades. I loosened my tie, but sweat still pooled in the small of my back and stained my armpits.” Now we’re getting it.

“I heard Mum shouting at me” – again, another filter; “I heard”. “Mum shouted at me” is enough, or even better, just write what Mum shouted in dialogue.

“She was really angry.” How did he know? He’s seen her, or heard her, and deduces from that information that she’s angry. So describe what he sees or hears, and let us see that she’s angry too.

‘“Why didn’t you remember what we said before about it being dangerous?” she shouted, furiously.’ Finally a bit of dialogue, but then it’s spoiled at the end. “Furiously” is an unnecessary adverb. The mood of the speaker and how the words are spoken should be obvious from the text. If they’re not, make them so. Very rarely should you use anything other than “said” as a speech tag, but speech tags will be the subject of another post at a later date.

Then there are several lines to finish which are all telling us how the child feels, embarrassed, angry, confused, all of which are informative, but entirely uninvolving.

Here is the actual passage. It’s from a book called “Skellig” by David Almond. See how the child’s emotions are shown? They’re never told. There’s not a single emotional adjective in the piece, but we clearly understand exactly how the child is feeling through incredibly sparse, but hugely effective dialogue and thought. Oh, and harking back to the first post on this blog about “there are no rules of writing”, Almond uses an “I heard”, and has two speech tags other than “said” in this passage. You see? There are no rules, not really.

“I stood daring myself to go in. 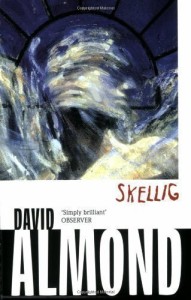 I was just going to skip inside when I heard Mum shouting at me.
‘Michael! What you doing?’
She was at the back door.
‘Didn’t we tell you to wait till we’re sure it’s safe?’
I stepped back and looked at her.
‘Well, didn’t we?’ she shouted.
‘Yes,’ I said.
‘So keep out! All right?’
I shoved the door and it lurched half-shut on its single hinge.
‘All right?’ she yelled.
‘All right,’ I said. ‘Yes. All right. All right.’
‘Do you not think we’ve got more to worry about than stupid you getting crushed in a stupid garage?’
‘Yes.’
‘You just keep out, then! Right?’
‘Right. Right, right, right.’
Then I went back into the wilderness we called a garden and she went back to the flaming baby.”

Not a single emotion mentioned, but we so get his frustration, his embarrassment at being caught red-handed disobeying his parents, and his unhappiness at the amount of attention the baby is getting. And the dialogue between harassed mother and bored young son is brilliantly observed. Great writing. If I’d been David Almond’s editor, I would have suggested dropping the words “when I heard Mum shouting at me” and substituting instead “when Mum shouted”, but I don’t think he cares.