Here’s an extract from an article in AFR magazine about the relationship between author and editor. Key takeaway: “You learn that getting a hard edit doesn’t mean you’re a shit writer”.

The question of how tough is too tough is a delicate one. Every writer’s temperament is different: some respond to tough love, others need coddling.

“There are some writers who put in a first chapter and need lunch immediately,” John le Carré told The Paris Review. “They need babysitting; they need to be able to call up at 2am and say they’re about to slit their wrists and so on. I don’t want to see my publishers, editors, or anybody until I’ve produced my baby. If I have frightful headaches about how to make my story work or how to end it or something like that, I will never communicate them until I resolve the thing somehow.” 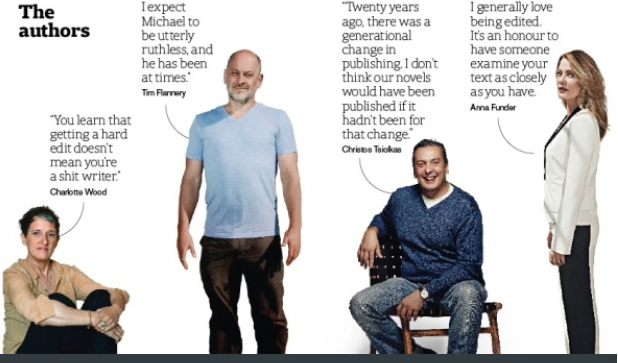 Authors speak about their editors.

In the same article, his editor Robert Gottlieb said: “If you are a good editor, your relationship with every writer is different. To some writers you say things you couldn’t say to others, either because they’d be angry or because it would be too devastating to them … That may be hard for some editors; I haven’t found it hard, perhaps because I like to please people.”

Craig Munro, author of a lively recent exposé, Under Cover: Adventures in the Art of Editing, quotes a terrible entry in Barbara Hanrahan’s 1980 diary that shows the fragility of some writers. She’d already had four novels published, all well received. “I do not know, any more, how to write,” her diary musings read. “They sent my poor Frangipani The Frangipani Gardens to Faber, who said I was too mannered, too mannered. And they are to publish Peter Carey’s War Crimes. And Chatto are to publish a new David Malouf book. And I am left behind. I do not believe in myself … I would die if I could. My writing is no good.”

And yet, despite Hanrahan’s despair and Michael Crichton’s panic, most writers are made of stern stuff. Charlotte Wood may have needed encouragement in the difficult early stages of The Natural Way of Things, when she was alone with her dreadful material, but she doesn’t want to be mollycoddled. The fact that “Jane will never bullshit you, even if it’s quite hard stuff she has to tell you”, is a key to their relationship.

“A lot of publishers think that writers are delicate little flowers who can’t hear the truth about things. And that just infuriates me because writers are tougher than anyone in the bloody publishing world, because we do it much harder,” says Wood. “You learn that getting a hard edit doesn’t mean you’re a shit writer. It just needs more work and the only way to fix it is to redo it.”

Heyward says he’s had very few combative relationships with writers, because his job is to make suggestions but the final decision is always theirs. He uses the metaphor of being at a car rally where he’s the navigator and the writer is the driver. “I might really want to put a persuasive case to you about why we need to turn left at that intersection, and we’re going to have a conversation about that, but in the end you’re the guy at the wheel.”

The other editors echo him: it’s the authors whose names are on the cover, not theirs. Palfreyman has even gone so far as to rewrite the notes of other editors who are lower down the pecking order before sending them to authors, because they were too brutal. “You have to make it sound like suggestions, with politeness. Here’s a suggestion, but feel free to take it or leave it,” she says. “It’s their work.”